How The Body Clock Affects How The Immune System Works 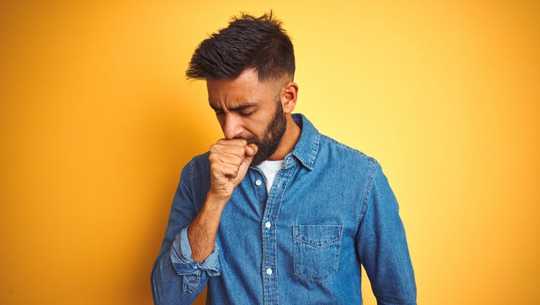 All life on Earth has evolved to cope with a rotating planet which results in the predictable transition between day and night. The details differ between plants, fungi, bacteria and animals, but the consistent feature is a biological “clock” that allows the organism to anticipate the change and prepare for it.

In animals, the central clock that keeps track of night and day is in the brain where it receives light from the retina to keep synchronised with the light or dark. But all cells in the body have their own clocks. Because these biological clocks have a cycle that is close to 24 hours they are termed circadian (“circa” meaning “about” and dian, meaning day, from the Latin “dies”).

We now live with cheap, bright, artificial light, shift-work, sleep-deprivation and jet-lag – all major challenges to the ancient circadian control mechanisms in our bodies. All these circadian and sleep challenges are associated with disease. But in our latest study, using mice, we discovered that infections at different times of the day cause different severity of disease.

Surprisingly, we found that the clock ticking in the cells of the immune system was responsible for the change in response to bacterial infection. In particular, specialised cells called macrophages, which are big cells that engulf and kill bacteria. 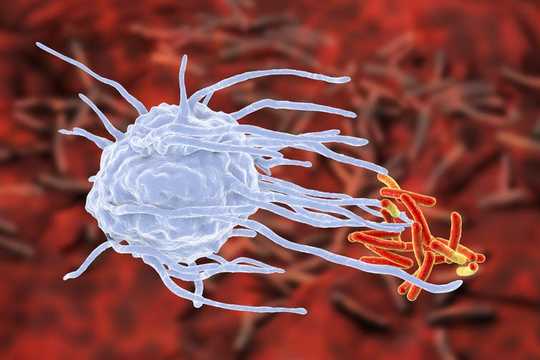 Macrophages, either growing in a dish or in a mouse, responded differently at different times of the day. And disabling the clock in these cells resulted in super macrophages, which moved faster and ate more bacteria than the normal macrophages.

We found that “clockless” macrophages protected mice from bacterial infection with many types of bacteria. A closer look at the macrophages revealed that the cells looked different, with a major change in the structural proteins that maintain the cell shape and are needed for cell movement and for eating bacteria. The change in the cell’s internal architecture, or cytoskeleton, became a focus of our studies.

To find out how the clock was changing the behaviour of macrophages, we turned to the core clock mechanism. This comprises a small group of proteins that change in abundance through time, so allowing the cells to tell the time. We found that one of these clock factors, called BMAL1, was the essential link between the clock and the macrophage behaviour. 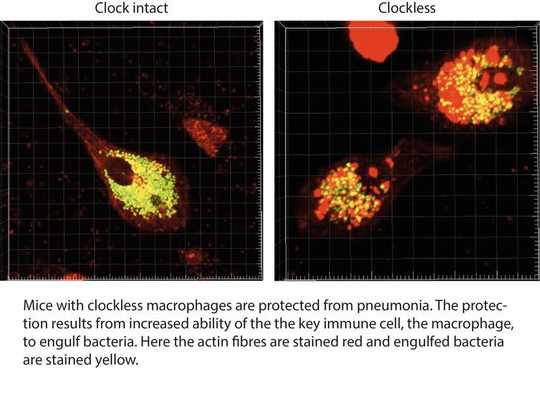 One of the major issues facing the modern world is the growing resistance of bacteria to antibiotics. There have been no new classes of antibiotics for 30 years. Bacterial resistance to antibiotics means that we have untreatable infections and face a future where surgery will become riskier.

Finding new ways to enhance defence against bacteria is a high priority. Discovery of a circuit linking the clock to bacterial defence opens up a new route to reduce our reliance of the limited range of existing antibiotics. It may be possible to enhance natural defences to bacterial infection by targeting the clock.

The operation of the circadian clock can be altered by light exposure, by changing meal times, by genetic variability within human populations and by new drugs capable of regulating this system. One problem with targeting the clock with drugs is that the impact on other systems will be broad and the consequences hard to predict. But short-term intervention to boost immunity to infection may offer benefits, at low cost.

Similarly, reinforcing the circadian rhythm of high-risk people, in hospitals for example, by controlling lighting and meal times may boost immunity and prevent hospital-acquired infections. Can Regular Earbuds Be Used As Hearing Aids?

by Michael A Stone
Hearing loss is a major global issue. Around 5% of the world population, 430 million, have… What To Do If You Have Covid Symptoms But Test Negative

by Taylor Kubota
In reality, you can be infected and have it fly under the radar of the medical system