How Eating Fish May Reduce Your Child's Breast Cancer Risk 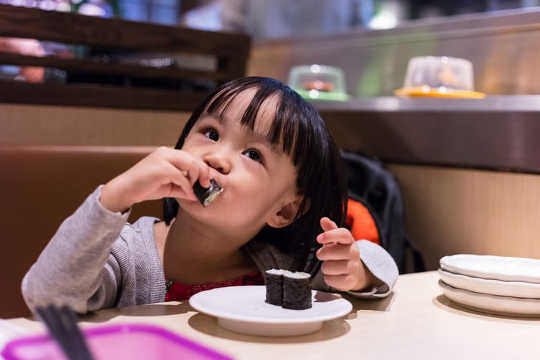 Exposure to omega-3 fatty acids during a child’s early years may play a role in reducing breast cancer risk later in life. (Shutterstock)

Omega-3 fatty acids are commonly found in plant and seafood sources. If you don’t have high enough levels of omega-3s in your diet, it’s a leading risk factor for death globally, contributing to the development of chronic diseases like cancer.

A healthy diet can significantly reduce your risk of developing cancer. This has led to great interest in the role of omega-3 fatty acids — especially in the prevention of breast cancer.

In experimental studies, it has been shown that omega-3 fatty acids during early years of growth and development may play a role in reducing breast cancer risk later in life.

But not all omega-3s are created equal.

Much of our research to date suggests that the benefits of omega-3 fats can be attributed to those found in seafood including eicosapentaenoic acid (EPA) and docosahexaenoic acid (DHA). In contrast, omega-3 fatty acids in plants such as flax and canola containing alpha-linolenic acid (ALA) are thought to be less potent.

But scientists have never been sure exactly how much more potent seafood omega-3s are — until recently, when our team at the University of Guelph helped to shed light on this question.

We conducted a study in mice that compared the impacts of ALA versus EPA+DHA on tumour development. The results show that both were beneficial in altering mammary gland development to decrease the risk of developing breast cancer. They also decreased tumour size and multiplicity following the onset of breast cancer.

The study shows EPA+DHA to be eight times more potent than ALA, however. This suggests that omega-3s from seafood sources may be significantly more effective at reducing breast cancer risk and improving prognosis.

How much fish is enough?

So are we getting enough seafood-based omega-3s in our diet?

A typical North American diet provides approximately one to three grams of ALA per day and only 100-150 mg of EPA/DHA per day.

These amounts fall in line with recommendations by the Institute of Medicine.

A growing body of research suggests, however, that dietary intakes of EPA and DHA should be much higher in order to promote optimal health and prevent chronic disease.

This is not a new concept. In 1999, the National Institutes of Health’s report recommended that, in order to promote optimal health and prevent disease, EPA+DHA should make up 0.3 per cent of our daily energy intake.

Based on this recommendation, the DHA-EPA Omega-3 Institute reports that this corresponds to 433 to 600 milligrams of EPA+DHA for children between the ages of one and eight years old.

This level can be attained in the diet by consuming two to three servings of fish per week, or by supplementing with a high quality EPA+DHA supplement.

Intakes of seafood-based omega-3s in children differ from adults.

Previous studies have shown that North American children have even lower intakes of EPA and DHA than adults.

In fact, a study in the United States revealed that 84 per cent of children consume less than one serving of fish or seafood per week.

So by incorporating more seafood or foods high in omega-3 fatty acids — such as omega-3 milk and eggs — early on in a child’s life, it may be possible to reduce long-term risk of developing breast cancer and other common chronic diseases later in life. Microbes in Your Food Can Help - or Harm - Cancer

by Gissel Marquez Alcaraz and Athena Aktipis
The microbes living in your food can affect your risk of cancer. While some help your body fight… Are Detox Diets Effective and Worthwhile or Just a Fad?

by Taylor Grasso
These diets promise quick results and can particularly entice people around the new year, when… Deepening Our Relationship with Food

by Candice Covington
Nowadays most everyone is familiar with the unique health benefits of fruits, vegetables, protein,… Here’s What Each Color of Vegetable Does in Our Body

by Evangeline Mantzioris
Nutritionists will tell you to eat a rainbow of fruit and vegetables. This isn’t just because it…