The Parable: There Are Two Paths Before You... 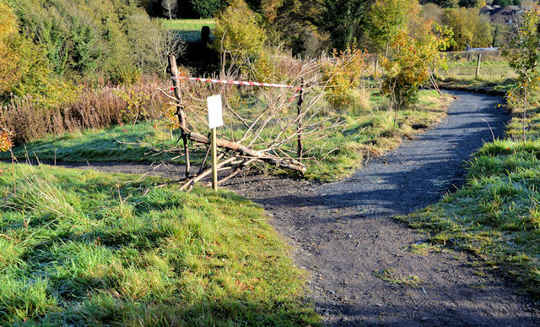 "Listen carefully to this parable and write it down in your own words after I leave. You will publish it later and it will be an inspiration to many. If you sense the Spirit in the words you will guess where it originated."

On a certain night, Jim, Mike, Ron and Dave died. Shortly thereafter they all found themselves walking on a beaten path. It seemed right to follow the path. Finally they came to a dividing point. One path veered to the left; the other to the right. They stood a moment, pondering what to do, when suddenly a man in white appeared and gave them instructions.

'Welcome, my friends', he said. 'You are approaching your new home and I am here to instruct you as much as is permitted. You notice there are two paths before you: One of them takes you to Heaven, a place more beautiful than you can imagine. The other takes you to Hell, a land full of darkness, despair, and wretched individuals. All I can tell you at this point is you are to choose a path, but once you reach your destination you cannot turn back. Once you get to Heaven you will stay there, or once you get to Hell you will stay there.'

'One more word I can say. Do not be frightened, for that reward you get in the end will be that which you deserve. Go forth confident that if you have led a just life, you will reap as you have sowed. You must proceed one at a time and each walk the path alone.'

After saying this the man disappeared. The four were astonished at this somewhat random method of reaching Heaven or Hell. Finally, they decided they must go forward and drew straws to determine who would go first. Jim got the first opportunity and chose the path on the right. He thought that perhaps this would lead to heaven because the "right" is always associated with "good." But as he proceeded he heard the fierce sound of wild animals, clouds seemed to hide the sun, and the earth seemed to shake. He became very frightened and thought, 'Maybe I have chosen the wrong path.'

He turned around, went back to the beginning and told the others of his experience. Then he decided to try the left hand path. As he ventured forth he saw more ominous signs. He kept wondering how far he could go before he could not turn back, and with each step he became more and more frightened until he was forced to retreat back to the beginning.

Seeing that Jim could not make a firm decision as to which path to take, Ron and Dave suggested Mike now take his turn. Mike, however, was paralyzed with fear for, according to Jim's story, neither path sounded very heavenly. 'I'm going to think about it a while', he said. 'Someone else can take a turn.'

It was now Ron's turn and he said, 'I'm picking the right-hand path and not turning back.' He followed through with his decision, and went past the sound of wild animals and through the darkness and storm clouds until he found himself in a place of unspeakable beauty and peace. He assumed he was in Heaven and rested there.

It was now Dave's turn to move onward. Jim said he thought he heard a wild animal eating Ron and a chill of concern spread through them all. Dave was not sure he was making the right decision but he chose the path on the left. He thought within himself: 'No matter what happens I'll go forward on this path and make the best of it.'

As he proceeded, things went from bad to worse. There were horrific shrieks from wild animals and storm clouds with fierce thunderbolts were everywhere. Still, he proceeded until he reached a sign that said 'Hell''.

Behind him, the path disappeared and there was no retreat. Before him was a depressing place dark and stormy, full of inhabitants living in run-down shacks. The people lived in constant fear of attacks from the animals and roaming gangs which stole whatever they could get their hands on. Everywhere he went he was told this was a land cursed by the devil, and that things are going to get worse for all eternity.

Dave thought long and hard within himself. 'I promised myself I would not retreat from this path and make the best of it. I refuse to listen to these voices of doom. Within myself there is no Hell and my conscience is clear, so why should there be Hell on the outside?''

He also questioned their belief the land was cursed by the devil. A handful of people took hope and listened, but the rest were afraid and even looked upon Dave as an enemy, fearing he would make things even worse than they were.

Dave gathered the people who would listen. They refused to accept the slum they were given as a final resting place and made blueprints of new beautiful homes. The best land they could find was an uninhabited swamp. They drained it and built their homes and a beautiful city with teeming gardens and landscapes. The gangs did not bother them, for the inhabitants supported and protected each other. The wild animals became friends, for the people nurtured them. Even the dark clouds and storms began to subside and bright, sunny days became a common sight.

The people who were against Dave saw what had been accomplished and they took courage; one by one, other parts of Hell became transformed into beautiful cities and landscapes. After a period of time there was nothing but beauty and peace as far as the eye could see.

Dave surveyed the now-beautiful land and came to a realization: One more thing needs to be done. He walked over to the original entrance and found that old sign which read 'Hell', tore it down, and replaced it with one that said 'Heaven'. As he did, another path with a fork in it appeared and so did the man in white. His look caught Dave's eye and he said, 'I think you know what you must do'.

Dave looked back and said, 'I see I must choose again'.

'Before I proceed, can you tell me the fate of the other three?'

The man answered: 'Ron is in a city that resembles the place you have created. He has one regret: he wishes he had a part in creating it. When that desire becomes strong enough he will be given another path to choose and will wind up in a place called 'Hell', as you did, and be given an opportunity to build Heaven.

'Jim and Mike are still paralyzed with fear, afraid to make a decision. They are the ones who are truly in Hell, yet sooner or later they must proceed onward.'

'And what lies ahead for me?' asked Dave.

'The unknown', said the man.

The statement made Dave afraid, yet excited at the same time. And with no hesitation, he proceeded on the path leaning to the right.

©1998. All Rights reserved.
This excerpt is reprinted with permission of the author.

The Immortal
by J J Dewey.

Joseph J. Dewey, 56, has been a student of philosophy, metaphysics and religion most of his life. He has seasoned experience with real estate, advertising, sales and promotion. He currently owns Great AD-Ventures, a company that offers a variety of business services. He is the author of The Immortal which presents unique and mystical teachings in a way that captivates the imagination. He recently initiated a plan to bring peace and unification among the religious world called The Sixteen Principles of Unification. Visit his website at http://www.freeread.com/ How to Make the Most Out of Every Minute

by Matthew Dicks
Once you have chosen to value every minute, you can begin to create systems by which those precious… Children... Seeing the World As They Desire It To Be

by Sherjuana A. Davis
It's been over 24 hours, but I know it was true. I just know. Still, Momma will not believe me. It… Let The River of Your Imagination Flow: Playing to Create

by Fabiana Fondevila
Many people regard the imagination with suspicion, as something that has no place in adult life. In… by Korydon Smith, Kelly Hayes McAlonie,and Rebecca Rotundo
Researchers have shown how creative thinking can be cultivated by simple habits like exercise,… How The Lockdown Has Changed Reading Habits

by Abigail Boucher ety al
During times of crisis, people find themselves faced with lifestyle changes. One of the earliest…