The Uptake -- The Day The Music Dies? 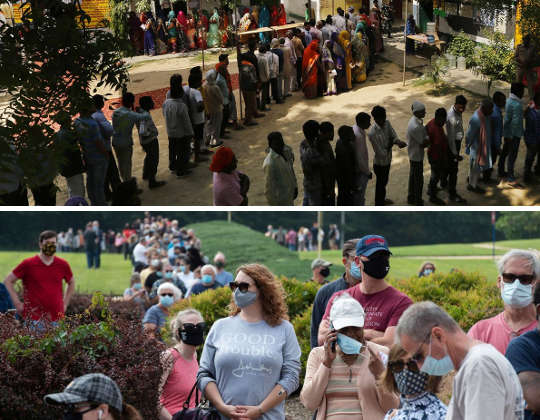 Top photo: voting in India Below: voting in America. Now what's that republican argument about American exceptionalism? Nothing but a ruse to trick their followers.

The best analogy I have heard regarding the election of 2022 is that democracy has had its' Dunkirk not its' victory. Yes,  we can be thankful for that. But despite many in the Democratic party spiking the football in victory at the 2 yard line, it was not a victory but merely a withdrawal to fight another day. That day to fight for is Democracy Day, the new D Day for short -- that's the presidential election day, Tuesday, November 5th, 2024, and not June 6, 1944 the allied invasion of Europe.

In the presidential election of 2000, I watched the debacle unfold here in Florida . It was more than a few hanging chads in South Florida. And it was mostly in my congressional district that Governor Jeb Bush and his Secretary of State disenfranchised many thousands of black voters. They pretended that all the ex-felons in Texas that shared a first and last name with someone in Florida actually moved to Florida so they could vote. Of course they only picked those names with black-sounding names. And they had access to the voter registrations. Pretty easy steal wouldn't you say?

I kid you not. It was an election that was called by the US Supreme Court which overruled the Florida Supreme court to hand the presidency to George W. Bush by less than 600 unverified votes. What did the GOP buy for America with Bush as president? Over 1 million dead, in America and the Middle East, 3 trillion dollars down a rat hole, and the Greatest Recession since the Great Depression.

Here in the South and in some other republican-controlled states, voter suppression is as old as America. While we have made progress with women's suffrage and the Voting Rights Act, the modern republican party led by republican Chief Supreme Court Justice John Roberts has managed to one-up even the post civil war Jim Crow era of poll taxes, and post slave patrol intimidation by the KKK and local law enforcement. Some of the worst of it endures to this day in back-water republican America.

Greg Plast has produced a documentary that highlights some of the shenanigans recently and the roots, historically, in the state of Georgia. You can watch the full movie on his website. - Robert Jennings

Many Ways To Skin The Voter Suppression Cat

My apologies to all us cat lovers. In fact there are many ways to skin the voter suppression cat today and steal an election without changing a single actual ballot. Make no mistake, republican turnout these last 2 elections has been historic and so has Democrat. They will be super-energized in 2024 and it will take an overwhelming effort by Democrats and Independents to save democracy. Game on GOP.

Here are just a few of the nefarious ways that republicans repress voting and steal elections:

1. Gerrymandering - This refers to redesigning representative districts so as to make it easier to elect their chosen party. Usually accomplished by cracking and packing. This was used most recently in 2016 to elect Donald Trump and again to overcome Democratic democracy concerns that produced a very slight takeover of the House of Representatives in 2022.

2. Limiting actual voting access in some specific districts. These produce long lines in working class Democratic districts that require an hour or so to all day affairs while typical republican districts voters nearly just waltz in. I myself have never had to wait more than a few minutes at the heaviest time and not at all if I chose the right time. Now I vote by mail which was permanent until republicans changed the law so I have to remember to request my ballot every election thus wasting my time and my local elections office's time.

3. Voter registration tom foolery. There are a myriad of ways election stealers use voter registration to circumvent democracy. These can include requiring you to register in person. Produce documentation that you might not have. That costs you money just to register even though you are well known to them. Just another form of poll tax. Let your imagination run wild as republicans do when they think up ways to limit voting.

4. State Legislation. As you read this, republican legislators in republican held states are passing legislation to make your vote for president immaterial in those states. Rather, the "winner" will be chosen by their state legislature. That is what Trump supporters tried to do in the 2020 election and failed. Now republicans will attempt to make it perfectly legal to do it in 2024.

∞. The list goes on and on to near infinity. If someone in the GOP can dream it up, they will try it somewhere. In the clip below watch deceased influential republican operative Paul Weyrich say, "I don't want everybody to vote". - Robert Jennings

The Father of republican Voter Suppression

Paul Weyrich has been called the  "father" of the republican right-wing movement. He was also co-founder of the influential and well-funded Heritage Foundation, Moral Majority and various other groups that have been instrumental in pulling America to the right and against the concept of "common good". I am adding "father of modern voter suppression" to the title of this infamous man who may have single-handedly made this republican party turn to the dark side. In this clip he complains that fellow Christians have "Goo-Goo Syndrome"  - Robert Jennings

Voter suppression: how democracies around the world are using new rules to make it harder to vote

Attempts to stop voters getting to polling stations, increase waiting times to place a ballot or add restrictions on who can vote are becoming issues in democracies around the world.

Techniques vary, but the intention is the same – to make voting more difficult. In the recent US midterm elections, lines at polling stations in the US state of Georgia, left citizens queueing for hours, often without access to seating or water, following the introduction of new rules.

Many people who vote republican mindlessly today, came of age in the 50s and 60s. It is when I came of age as well but the republicans lost their grip on me with the Newt Gingrich and The Contract With America ruse. For those that came of age then, perhaps the song by Don McLean, American Pie, is the most appropriate musical lament of a promising age struck down by assassins bullets and cultural change premeditation. In short it opened a new age of greed, corruption, and political division currently only superseded by the US Civil War.

The evidence of republican premeditation for this era we are in today is best documented in the Powell Memo written to the US Camber of Commerce that urged war on the hopes and dreams of the 50s and 60s. Donald Trump tapped into this generational lament with his fake populism Make America Great Again an unoriginal retread of Ronald Reagan.

We have had our years of excess and over-consumption. It is time for my generation to cast off the chains of republican propaganda and suppression and leave our descendants a chance of survival in a world already on fire. Is this the day the music dies? - Robert Jennings

Robert Jennings is co-publisher of InnerSelf.com with his wife Marie T Russell. InnerSelf is dedicated to sharing information that allows people to make educated and insightful choices in their personal life, for the good of the commons, and for the well-being of the planet. InnerSelf Magazine is in its 30+year of publication in either print (1984-1995) or online as InnerSelf.com. Please support our work.

This article is licensed under a Creative Commons Attribution-Share Alike 4.0 License. Attribute the author Robert Jennings, InnerSelf.com. Link back to the article This article originally appeared on InnerSelf.com The Uptake -- Are You Scorpion, Frog, or Free

by Robert Jennings, InnerSelf.com
We live on the cusp of great achievement or great despair. But do we have to live this dilemma… by Robert Jennings, InnerSelf.com
So what is this new word permacrisis. Well it is simply permanent crisis. But it is certainly not… by Robert Jennings, InnerSelf.com
The election in the US is over but the results are not known -- and won't be known for 4 weeks as… by Robert Jennings, InnerSelf.com
The American election is just 7 days away. The intensity is building. One has to ask oneself are we…

by Robert Jennings, InnerSelf.com
The American election is just 7 days away. The intensity is building. One has to ask oneself are we… by Robert Jennings, InnerSelf.com
The right-wing in the U.S. has done an excellent job of scaring the crap out of everybody with… by Robert Jennings, InnerSelf.com
Clearly less than 10% of the population has already moved to the darkside. And another 20-25%…